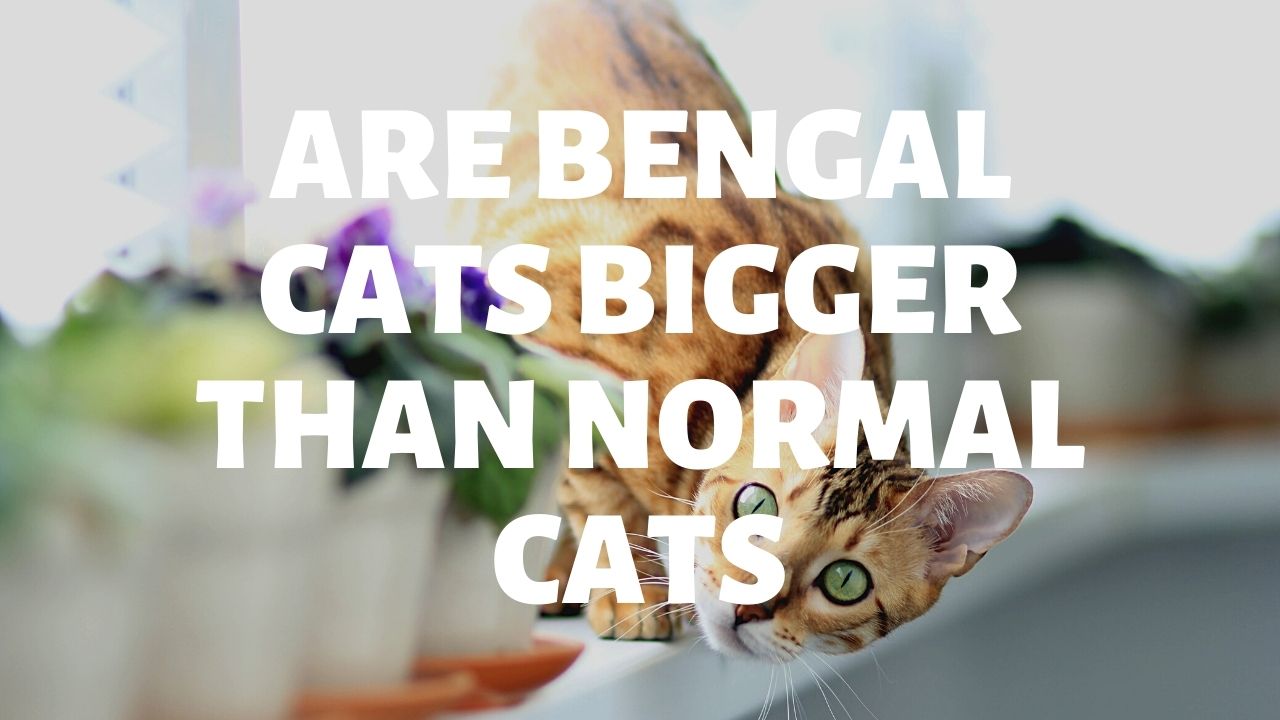 In this article, we are going to answer the question “are Bengal cats bigger than normal cats?”

Contents hide
1 Are Bengal Cats Bigger Than Normal Cats Because Of Their Ancestry?
2 At What Age Are Bengals Fully Grown?
3 Appreciating The Width And Breadth Of A Bengal Cat
4 Wildlife Issues With The Bengal
5 Enjoy Your Big Bengal For Years!

Generally speaking, Bengal cats are larger than the average house cats because they have muscular bodies. It is a medium to large sized cat breed with spots, akin to a leopard. When you look at Bengals, they are distinctly long and lean.

Are Bengal Cats Bigger Than Normal Cats Because Of Their Ancestry?

You can learn more about the history of the Bengal cat here.

At What Age Are Bengals Fully Grown?

Appreciating The Width And Breadth Of A Bengal Cat

Known as the Living Room Leopards, the Bengal’s fascinating spot patterns, elegant stride and long legs remind us of its much larger wild cat ancestor, the Asian Leopard Cat or the Felis Bengalensis. It brings into your home its exotic beauty which would also look very much at home in the jungle, only that this time, it is a domesticated cat.

Among its attractive physical attributes are the golden shimmer that it shares with its Asian Leopard cat ancestry. Their coats may show interesting features like spots, arrowhead markings, rosettes and/or marbling. If you just happen to see its shadow or its silhouette that have been magnified by a reflection of light, you might think a wild leopard has invaded the household!

Wildlife Issues With The Bengal

Some people are fearful that because the Bengal is descended from wild ancestry, that there might be “hard to tame” or temperament issues that they have to deal with. This is not a problem at all because the Bengal cat that we know is already domesticated. Most Bengal lines tend to be the most loving , energetic, enthusiastic and loyal cat pet you can ever own. When you come home, tired from work, they will be the first living creatures to greet you at the door. Their loyalty is spectacular, and to visitors, they are very friendly.

Enjoy Your Big Bengal For Years!

These beautiful Bengals have a life expectancy of 12 to 16 years. Enjoy their company as much as you can. They are a special breed!

If you’ve got a bigger cat but aren’t sure if it’s a Bengal, then you can read our guide here on telling if your cat is part Bengal.