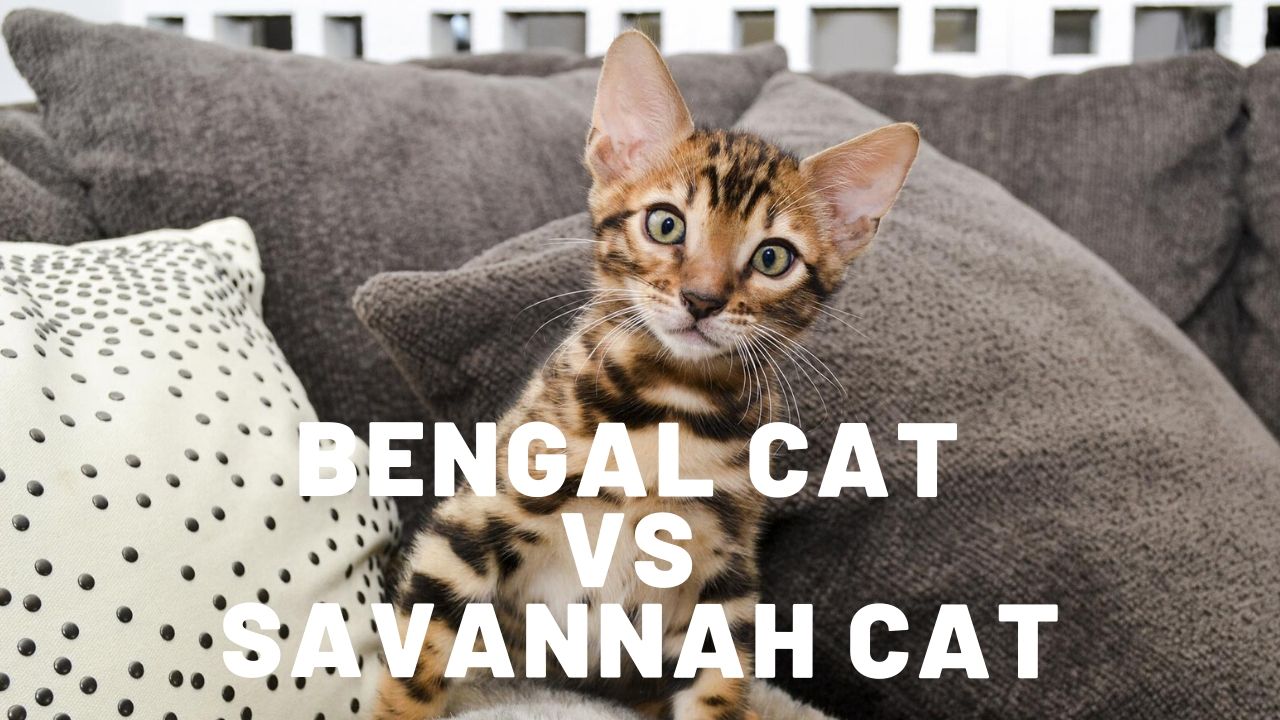 Bengal Cats and Savannah Cats are hybrids, meaning they have been bred as a cross between domesticated cats and wild cats. The type of cats used in these pairings are the basis behind many of the features of the Bengal and Savannah Cats, from their size and colorings to their personalities.

What Is a Bengal Cat?

Bengal Cats have been around for a few decades, having initially been bred by a scientist studying immunology. He bred domesticated cats with the Asian Leopard Cat, a small wild cat. He used the Asian Leopard Cat in his studies because many were resistant to the feline leukemia virus, which most cats are susceptible to. Dr. Centerwall, after breeding several cats, rehomed them with Ms. Jean Mill, who set out to get recognition for the breed through The International Cat Association (TICA). The Bengal has been a recognized breed since 1983.

You can learn more about the history of bengal cats here.

What Is a Savannah Cat?

The Savannah Cat was first bred by Judee Frank, who crossbred a Siamese with an African serval, which can be significantly larger than the Asian Leopard Cat. First bred in 1986, these cats did not receive recognition from TICA until 2001, but they are fast becoming a popular breed around the world.

The Savannah Cat is generally much larger than a Bengal Cat. Male Bengal Cats tend to be larger than females and only reach around 12 to 15 pounds. In contrast, a Savannah Cat may be as much as 50 pounds and the size of a medium-sized dog. That’s quite a cat!

Bengal Cats feature rosettes on their coats, much like their wild ancestors. These clusters or blotches are usually ring-shaped and come in a variety of colors. A hallmark of the Bengal’s coat is its shimmering quality, which comes from a male named Tory used by Ms. Mill. The coat of many of these cats looks as though it has been splashed with glitter. Bengals come in a variety of colors, with a more popular color recently being a white base color. Their bellies are often very light white or cream in color, as well.

Savannah cats also have spots on their coats, but they are typically round to ovoid, rather than ring-shaped. Many of these cats also have stripes that run down their backs. They may be black or brown, with some even a cream base color.

Bengal Cats and Savannah Cats both make excellent pets for an active household. If you don’t do enough to stimulate these kitties though, they can get into a lot of trouble. Boredom doesn’t suit these cats. In addition to mental stimulation, which can occur by playing games and setting up things for your cat to play with, it’s important for them to have a perch that they can sit on and observe the goings-on of the household. Especially with Bengal Cats, it’s important to pick a perch for them, rather than letting them pick one themselves, as it can cause dominance issues within the household.

Bengal Cats tend to be “talkers,” making chirping sounds and other vocalizations. They are often considered to make more noise than most domesticated cats.

Savannah Cats are considered to be the “dogs” of the feline world. Many of these cats will play with you like a dog will, and you can even walk them outside on a leash. While any ol’ cat might do these things, most Savannah Cats share this personality type.

Both Bengal Cats and Savannah Cats tend to like water. While you might not get them to readily take a bath, you will often find them playing with water dripping from the faucet or in a water fountain for them to drink out of. Just watch out, as you might find your Bengal or Savannah Cat unexpectedly in the shower with you!

There are a few health issues that both Savannah Cats and Bengal Cats are at risk for. One is known as hybrid male sterility. This problem means that your hybrid male cat is sterile, without having them neutered. It tends to occur more commonly in early generations of both species, a common problem with hybrid animals.

Bengal and Savannah Cats are also at risk for Hypertrophic Cardiomyopathy. This disease is a heart condition, where the cat’s heart muscle gets abnormally thick, which affects the function of the heart and can lead to the cat’s death. There is no known cure for Hypertrophic Cardiomyopathy. The best way to prevent it is to not breed animals affected with the condition.

Another issue, which tends to occur more commonly in Bengals than in Savannah Cats, is Progressive Retinal Degeneration. With this condition, your cat loses photoreceptors within the retina of the eye. These are cells that register light hitting the back of the eye, and without them functioning, your cat will gradually lose his or her vision.

Bengal Cats and Savannah Cats have many similarities. As domesticated-wild cat hybrids, they tend to be active members of the family and need a great deal of mental stimulation. They are generally patterned similar to their wild ancestors, with spots or rosettes that would help these animals blend into their surroundings in the wild. Regardless of which animal you choose to bring into your home, you’re bound to have an adventure.