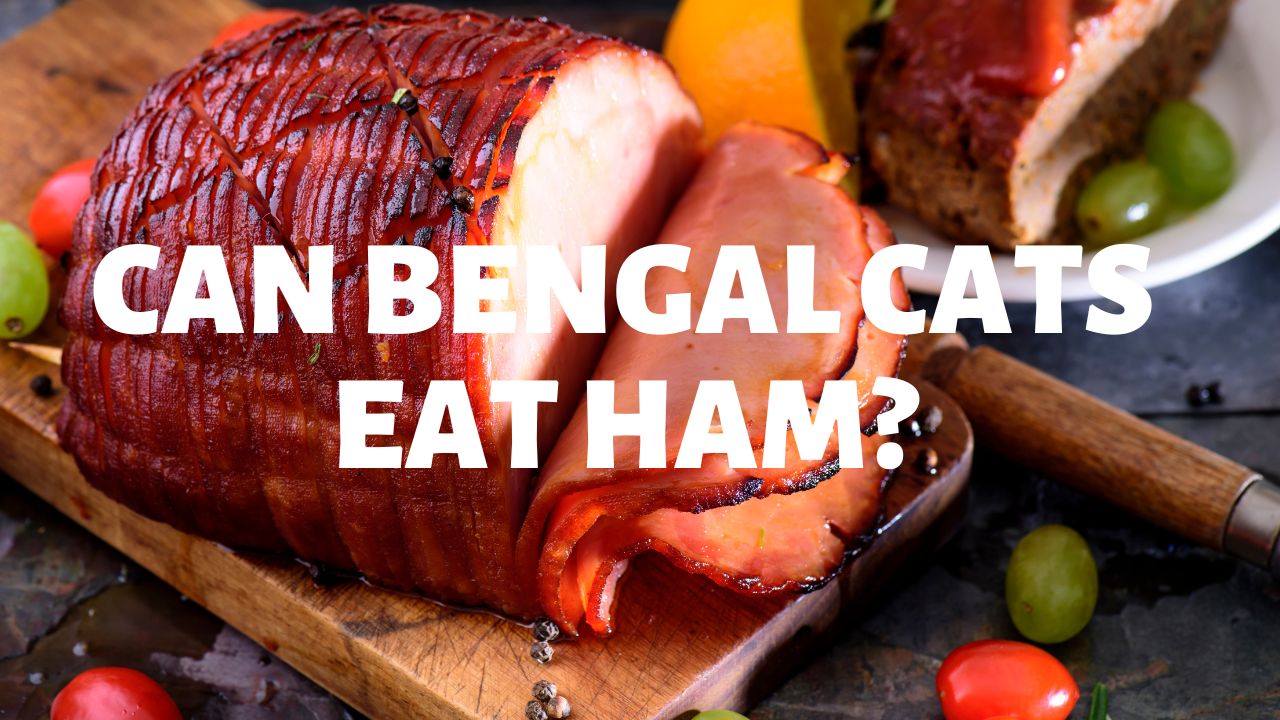 Ham is a popular meat, and is supposedly one of the oldest meat products consumed by humans.

Contents hide
1 In A Hurry? Here’s What You Need To Know:
2 Ham As An Occasional Treat
3 Health Risks From Feeding Your Bengal Cat Ham
4 Recap – Can Bengal Cats Eat Ham?

All around the world, ham is popular in different dishes, such as sandwiches, Christmas dinners and more.

With its delicious, rich flavour, there’s little wonder why many humans love ham. My younger brother used to eat it by the truck-load when we were kids. I’m fairly sure mum and dad had to take on a second mortgage to fund his prodigious levels of ham consumption.

But what about Bengal cats?

Can Bengal cats eat ham? Next time you’re chomping down on a tasty ham and cheese sandwich and your Bengal shows interest, can you safely feed him/her some ham?
In this short article, we are going to look at whether or not Bengals can eat ham (or any breed of cat, for that matter).

In A Hurry? Here’s What You Need To Know:

Ham As An Occasional Treat

Realistically, your Bengal cat (or any other breed of cat) can have ham as an occasional treat. If you’re sitting there panicking because you’ve given your Bengal a piece of ham from tonight’s dinner, then you don’t have much to worry about – ham is not toxic to cats in the way that some other foods are.

However, ham is also not the sort of thing you should be giving frequently – or in large quantities.

There are some potential health risks associated with feeding ham to cats.

The high fat content of ham can lead to pancreatitis, which is a potentially life-threatening condition that occurs when the pancreas becomes inflamed. Symptoms of pancreatitis include vomiting, diarrhea, abdominal pain, and loss of appetite. This isn’t very likely – and is more of a risk from excessive and/or chronic consumption of ham – but something to bear in mind nonetheless.

The high sodium content of ham can also be harmful to cats, as it can lead to electrolyte imbalances and potentially even kidney damage. Ham is a high sodium human food, and if you’re feeding your cat “human sized” chunks of ham then the relative saltiness/sodium content is even greater for your cat. If you do give your Bengal cat ham as an occasional treat, ensure they have ready access to plenty of fresh water if required.

If you are going to feed your Bengal cat ham as a special treat, one thing to be wary of is that sauces, glazes and seasonings (which are all fine in moderation for humans) can seriously elevate the sodium, fat and sugar content of the ham and make it much less acceptable for your cat.

Therefore, you should feed plain ham only (so if you’ve got some glazed Christmas ham leftovers lying about, you might want to trim around the edges and wash off any sauce etc).

Overall, it is best to avoid feeding ham to cats, as it does not provide any nutritional benefits and can potentially cause serious health problems if fed to your Bengal in excessive quantities and/or too frequently.

The odd piece of plain ham here and there isn’t going to be dangerous for your Bengal, but you probably shouldn’t make it a routine part of his/her diet.

There are plenty of other protein sources that are more appropriate for cats, such as chicken, turkey, and fish. These protein sources are much lower in fat and sodium, and they provide the nutrients that cats need to maintain good health.

Although cats are obligate carnivores, ham is definitely one of the less healthy meat options you could give to your cat.

If you do decide to give your cat a small piece of ham as a treat, make sure to do so in moderation and be mindful of any potential adverse reactions. If you notice any strange behaviour or sickness, then discontinue and consult your vet if required.