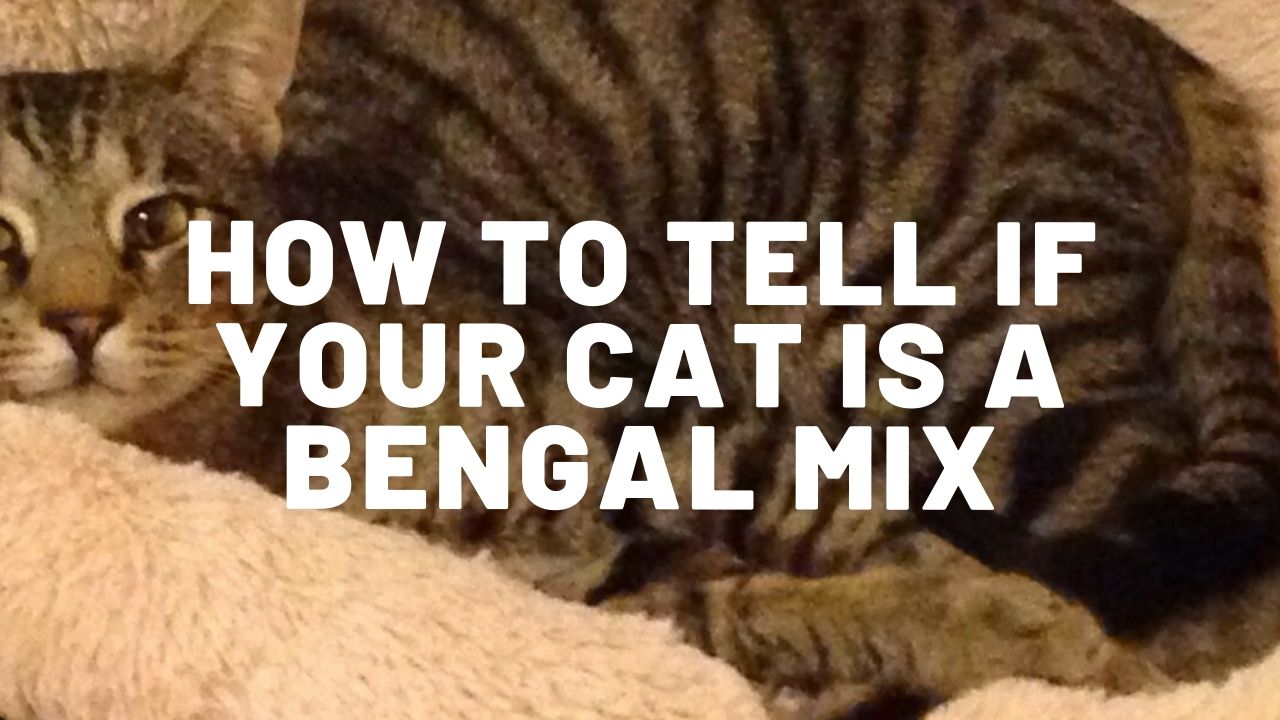 It can be rather hard to tell if a cat is a Bengal Cat mix, especially if there is no pedigree trail to follow. This breed was largely created by breeding several different domesticated cats to each other and with the Asian Leopard Cat. As such, some of the features of the Bengal Cat may be shared with the cats that make up their pedigree, so if you cat has a bit of Ocicat in them, they might be spotted.

Bengal cats come in a variety of colors, including silver, brown, black, cinnamon, blue, and torbie. They also tend to have markings that make them look like their wild cousins, including spots or rosettes. They generally also have a marbled pattern to their coat. Bengal cats tend to have spotted bellies, but many domesticated cats like tabbies also have spotted bellies. One distinguishing characteristic is that Bengal Cats have almost no white on their body, just potentially small markings on their belly, chin, or whisker pad area.

When you pet a Bengal Cat, you’ll notice that its fur is incredibly soft, a trait often referred to as pelted. In addition, each of the individual hairs is “ticked,” which means that there are multiple bands of colors on each hair. Many Bengal Cats also have a popular glittering appearance cased by the tip of the hair strand having less pigment, so when light shines through, it sparkles.
Different domesticated cat breeds can show some of these coat qualities, such as Ocicats and Egyptian Maus. It’s no wonder these were some of the breeds used to create the Bengal Cat.

Another feature of Bengal Cats is that they tend to be lean but very muscular cats. You won’t commonly find them overweight. Their body is structured a bit differently than other cats, with their hind limbs higher than their front limbs, which gives them an impressive stride. Some other cats may have this same feature, but it is one that the Bengal Cat gets from the Asian Leopard Cat.

The Bengal Cat’s body is typically long, with a long tail that they can use for balancing while they climb all over your house. While they have a long body, their head is generally small, and they hold it out as they move, similar to the way a leopard moves. If you are looking at their head, they often have ears that are more rounded than a normal domestic cat’s ears, and their eyes tend to be more of a rounded shape than a normal cat’s generally almond shaped eyes.

One of the reasons Bengal Cats are hard to differentiate from other domesticated cats is that they share features with domesticated cats, such as tabby cat. These kitties both have a rather distinct “M” shape on their foreheads. In addition, they have an area on their ears where the fur is short and shaped sort of like a thumb.

Bengal Cats are known for being a little bit mischievous. They tend to be vocal and talk a lot, with a wide range of noises than a traditional domesticated shorthair cat. Indeed, their noises range from yowling cries to screams. They may even grunt. Especially when they are little, they can also make chirping sounds.

Asian Leopard Cats tend to be impressive jumpers and climb high up in the trees. You will find that Bengal Cats have some of the same tendencies. They will often climb as high as they are able to within a room and perch there, in places ranging from the top of a cabinet to the top of a door frame. They tend to be big fans of not just heights, but vertical spaces.

Bengal Cats tend to have high energy levels. They need to burn off energy every day and do not do well confined to small areas. Because of this, they don’t often make good apartment cats. Bengal Cats tend t be clever animals and need to have engaging activities with their humans. For instance, some do quite well walking on a leash and harness outside. You have to be careful with Bengal Cats because many of them may learn to open doors and even windows when they get bored.

Bengal Cats tend to love water, a trait that they seem to have inherited from the Asian Leopard Cat. Depending on the cat, they enjoy more than just batting at water, they like getting in it and swimming, as well. Some may even use water as their own litter box area, so a Bengal is the perfect cat to train to use the toilet.

Of course, many other cats may meet these same distinctive traits. You will find that many young cats are active and can find themselves getting into trouble. Stereotypically, many cats don’t appreciate water, but you can find some that aren’t Bengal Cats that enjoy a little splash.

It can be hard to determine if your cat is a Bengal mix or not because Bengal Cats share so many features with other cats. Instead of wondering what they are, embrace your kitty’s distinctive personality and appearance and let their behavior shine on through.