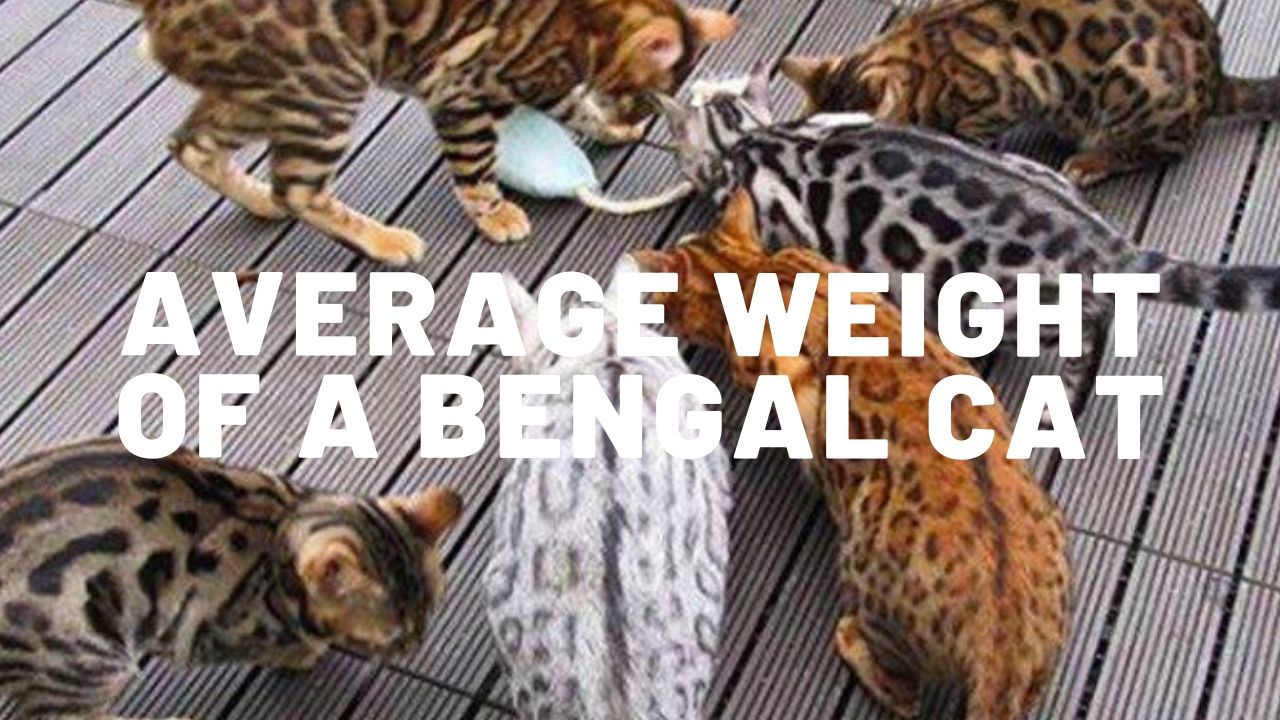 Bengal Cats are delightfully energetic feline family members that can find themselves getting into lots of trouble if they are not kept in an enriched environment.

Many people keeping these cats wonder how big they will tend to get when they are purchased as kittens.

In this article we look at the average weight of a Bengal cat and compare it to other breeds.

Average Weight Of A Bengal Cat

The average weight of a Bengal Cat is between 8 and 15 pounds, although some members of this breed will be a little larger, particularly if they are male. These cats tend to seem large but lean due to their builds. Females are usually around 8 to 12 pounds, while males may get as large as 22 pounds, although they typically end up between 10 to 15 pounds.

The reason that Bengal Cats can be so variable is due to the breeds that have been bred into the lines of Bengal Cats. These kitties are crosses between Asian Leopard Cats and one or more of several domesticated cat breeds, including British Shorthairs and Bombays. Cats that are larger tend to have more British Shorthair than other breeds.

Click here to learn more about the history of Bengal cats.

Abyssinians tend to be relatively small cats, usually ending up around 6 to 10 pounds. These cats feature a distinctive coat, with individual hairs having bands of color in their shafts. This cat breed is believed to have originated in Ethiopia, in what used to be called Abyssinia. Like the Bengal Cats, Abyssinians tend to have lean and slender bodies. They are fine-boned, with relatively large ears compared to the size of the cat’s body, and they have almond shaped eyes. Abyssinians are generally born darker and lighten as they age, and they come in various colors, with the original color referred to as ruddy in much of the world.

Bombays are often between 6 and 11 pounds and were developed as a cross between sable Burmese cats and black American Shorthairs. These cats are often called a “mini panther” or Black Burmese cat. They have a sleek, glossy coat that is all black, with a black nose and mouth, as well. They tend to be muscular cats, a feature which has been inherited by the Bengal Cats.

British Shorthairs are generally the largest breed of cat that has been bred into the Bengal Cat family. They are usually between 11 and 18 pounds, making them a relatively large domesticated cat. These cats have a stocky build, generally more so than that of a Bengal Cat, and the most common color for these cats to be born as is a blue-grey color. The British Shorthair cats have a long and varied history and are considered one of the most ancient cat breeds known.

Egyptian Mau cats are a relatively rare breed. These cats are often relatively small cats and are usually found between 7 and 11 pounds, and they are one of the few breeds of cats that are naturally spotted, which has contributed significantly to the development of the Bengal Cat’s coat.

Interestingly, these spots typically only occur on the tips of their hairs. They are compact but slim, with higher hindquarters than forelimbs, which is the normal physique of the Bengal Cat as well. These tend to be fast cats with musical voices, much like the Bengal Cat, and they have been measured at going as fast as 30 miles per hour.

Ocicats are generally between 6 and 15 pounds. These cats have been bred to resemble wild cats, but there is no recent wild DNA found within its genetic makeup. These cats are spotted and are considered to look similar to the ocelot. The main breeds that have been bred into the Ocicats are Abyssinians, Siamese, and American Shorthairs. The American Shorthair was used to bring silver tabbies into the mix, which has led to the breed developing a silver color and distinctive markings. The American Shorthair also contributed to this breed developing a larger bone structure.

In Summary – What Is The Average Weight Of Bengal Cats?

Bengal Cats are found in a range of sizes, but they are generally considered to be a medium sized cat. Females are typically smaller than males, with some males being twice the size of the average female. This is not a common occurrence, however, and it tends to be more common with Bengal Cats that have a lot of British Shorthair in their mix. The build and colorings of the Bengal Cat have a great deal to do with their ancestry, with spots coming from breeds such as the Egyptian Mau.